You have a company and your top sales are based on a very old technology?  You have volume but low margins?  You try to sell your more expensive products but your customers are still loyal to your low-cost products ?

Come to Brussels and lobby the right DG at the European Commission.  If you succed to convice them to change the european rules, your stakeholders will be very happy.

One of the most successfull case is the light bulb business.  While european consumers were happy with their incandescent light bulbs, European Commission decided to forbid this technology. 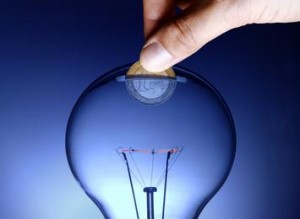 Many people are not satisfied with the alternative technology : CFLB.

The upfront cost of compact fluorescent lightbulbs (CFLB), while higher than that of incandescent bulbs, is now low enough that if the claimed energy savings were real and inconveniences modest, rational consumers would switch.

However, CFLBs emit considerably less light than is claimed, and a substantial percentage burn out before their expected lifespan, somewhat offsetting the net cost saving from installing them. Moreover, consumers are heavily inconvenienced in their disposal, since they contain toxic mercury, which is illegal to discard in ordinary trash.

Had governments enforced truthfulness in the efficiency and lifespan claims of CFLBs, and provided convenient disposal mechanisms, many consumers would have switched voluntarily. Then the additional energy usage by the holdouts would have been modest and declining. Forcing consumers to switch imposes arbitrary costs, especially on those who for health or other reasons want to remain with incandescent bulbs. It also violates market principles of consumer freedom of choice.

But for Philips, it’s a master stroke.  First step, they convinced Dutch government to ban Edison’s bulb.  Dutch environment minister continued lobbying in Brussels.  Angela Merkel, who was really impressed by Al Gore’s movie, accepted the ban.  And now, Philips is selling millions of light bulbs with an extraordinary margin !

Have a look to this Power Point Presentation of Philips found on the OECD website:

Philips Lobbying Presentation
If you see the last published results of Philips, it was a good strategy (Lighting information in page 50).